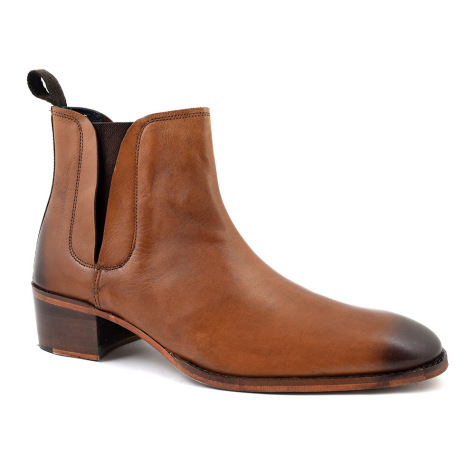 A funky tan cuban heel boot which has a cool chelsea style with a V shape dark brown elastic gusset . The tan bleeds into a darker brown to the toe and heel (which is 5cm high). A hark back to the 60s when the Fab Four popularised the beatle boot.

Stand out from the crowd in these tan cuban heel beatle boots. A glorious caramel brown leather upper with a dark brown slim side gusset and that ever important cuban heel. The heel is 5 cm high and the back tab makes this boot easy to glide on and off. The colour transforms into a darker brown at the toe and heel which is pretty clever (think about which parts of your boots get dirty first). There is method in the madness. We can see these mens heeled brown boots looking mighty fine with a pair of slim trousers whether they be jeans or smarter trousers. Well why not? Remember the uniform the fab four wore right? Cuban heel boots with sharp tailored suits. If they can wear heeled boots with a suit then so can you.

History of the Cuban Heel Chelsea or Beatle Boot

In a nutshell, the Kings Road is where the name comes from in the 60s when the super fashionable started wearing these side gusseted boots. Rock gods like Jagger were wearing them as were the Beatles. Allegedly , the Beatles bought a pair of chelsea boots from Anello and Davide that had been fitted with  a cuban heel. All four of them took a shine and there you go, they became called the Beatle boot! Of course the cuban heel stems from the hot Latin dances men wore such heels to dance dramatically in. Today, any man can wear this heeled cuban heel chelsea boot. Bring out the drama, pull on the cuban heels.