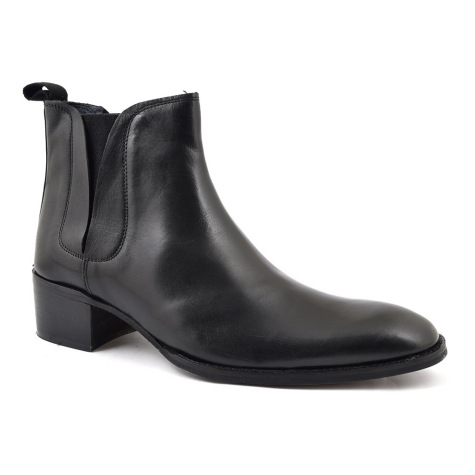 A black cuban heel beatle boot which has a 5 cm high heel. It evokes a rock and roll era where hipsters on the Kings Road would show their style following legends like The Beatles. This black chelsea boot has slim side gusset and a pull up tab for ease of wear.

So the fab four wore black cuban heel boots in the 60s. Heeled boots were prevalent in the 9th century when horsemen wore them to stand strong on horseback. Yes that long ago, men wore heels. Through history they have come in and out of fashion. Take the 16th century and France where aristocracy wore heels to show status: what could you do in a pair of heels on cobbled paths? Not much. Nor did one have to if one was rich. The fashion became seen as obscene and not manly and the lower mens shoe was around for a very long time. Our modern day romance with heels began again when the underground brought these cuban heels back into fashion psyche on the Kings Road in the swinging sixties. Super stars of the day wore them and made them highly desirable. Today, they are worn with gusto having had an interlude by many stars like Prince, Noel Fielding, Brand and bands like The Horrors. You don’t have to be a rockstar to wear these. You do have to be original though.

How to Wear Cuban Heels

With confidence. That is all.