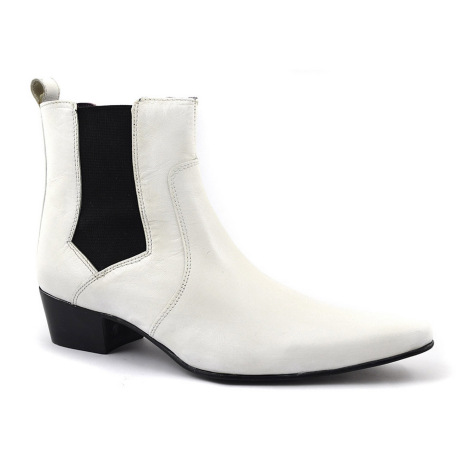 White heel chelsea boot with a black side gusset. A 45 mm heel gives height. Perfect for a wedding! Did you know high heels were originally an essential accessory for men when horse riding? Check out a very brief history below.

Not for the faint hearted, these white heel chelsea boots are for men who are not afraid to experiment. We can imagine these white cuban heels with a printed sleek fitting suit in a cool print or with skinny jeans. We can imagine this white boot being worn by a man at his wedding.  We can imagine the likes of Prince and Michael Jackson wearing them on stage. Maybe you are a star wars fan and want cool storm trooper boots. Men historically wore heels in battle and over time, heels were a symbol of wealth and status  (think Louis XIV). “One of the best ways that status can be conveyed is through impracticality,” Semmelhack and how better convey that than men in high heels. This was considered quite masculine and over time this changed with women taking the mantle of heel wearing. Back to the future, the 60s saw the rise of the chelsea boot with young artists and free minded individuals wearing them. The elastic side (a Victorian invention) was indicative of this boot. The Beatles added onto this by designing shoes with a cuban heel which was popular footwear in Latino dance like the Flamenco. Undeniably, you need confidence to pull off this pair of mens white cuban heel boots but you only live once so why not! You will need to look after them so we would recommend protecting them with a leather spray before wearing. Afterwards, it is a good idea to get boot trees and insert them as this will help to maintain the shape of these white heeled mens boots. The toe is pointed so you could stuff some paper down which will again keep the shape but also deal with any unwanted odours.  In terms of cleaning the leather, invest in some white polish. We stock many other colours of mens cuban heel boots but this white heel chelsea beatle boot is a must for you experimental guys out there who like to make a statement.