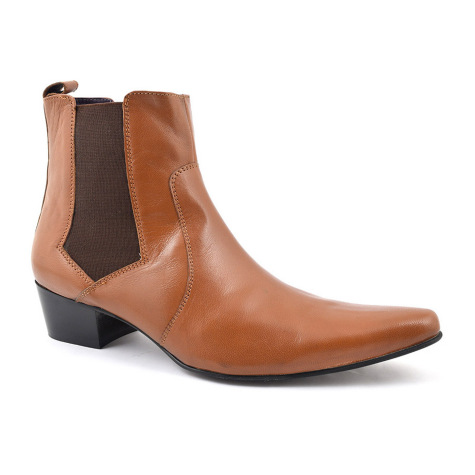 Walk tall in tan cuban heel boots. They have pointed toes and a side gusset. The heel is 45 mm high and they look cool. Crafted in lush leather, they would look great with skinny jeans. Interested in the origin of this? Want to know who was famous for wearing them? Scroll down and find out.

We can see you rocking out in these mens tan cuban heel boots or looking dapper in the sharpest mod like suit. However you wear them, you will be original and be expressing yourself in your own way. This is exactly what the forefathers of this boot did in the heady days of the 60s when huge icons like the Stone and Beatles wore them.  It was the latter who took the idea of the chelsea boot and added on the cuban heel. Men wore cuban heels in dances like the Flamenco and in fact, men wearing heels goes back a lot further than that. Men in Persia were known for wearing a heel on their boots and there was a reason for it. This made them stand firm in their stirrups when fighting enemies and when they needed to fire their ammunition. Bet you didn’t know that! More commonly known is that the upper echelons of society wore them and especially Louis XIV. They became perceived as quite dandyish and had their hay day around the time of Napoleon who did not like them at all. The distinguishing feature of a chelsea is the side elastic and tab at the back of the boot. Traditionally they were round toe but the advent of the 60s experimental style meant that a pointed toe like this one became de rigeur. Check out the boss at Gucinari in his version in the 60s here . How cool does he look and it is no wonder he was known as Ringo back then. Inspired by all this, Joe (the boss) has created a huge range of mens cuban heel boots for you. This tan leather version is beautifully simple and a great warm colour. The side elastic is a cool shape and these are so easy to pull on and off: no fussing with laces. How easy are they to pull off as a look though? Mens brown cuban heel boots give you an individuality and originality that you won’t get from other boots. They show you are not afraid to be different and have a self-expression all your own so the answer to that is: dead easy.