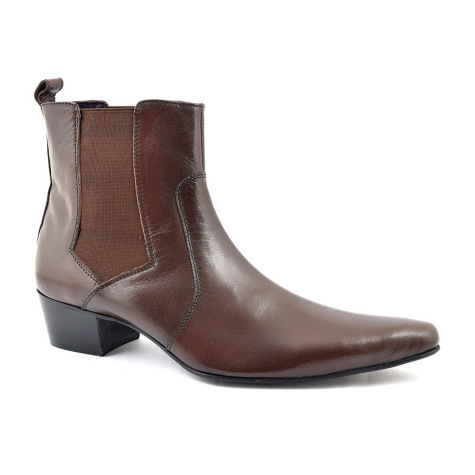 Gorgeous classic dark brown cuban heel boots which really do exude style. They have a 45 mm heel and side gusset. Get a luxury look and walk tall with these lush mens boots. Ever wondered whose company you might be in if you wore boots like these? Scroll down to find out.

What a decadent colour this dark brown cuban heel boot is. It is like a bitter chocolate in that it is not to every ones taste but we know some of you just love this style of mens boot. The cuban heel boot is an acquired taste but you are in the company of rock legends when wearing these boots.  You are also in the company of warriors as if we go back, way back in history, Persian fighters wore a heel to give them a solid stance in their stirrups. This in turn helped them to stand secure when they stood up to aim and fire their bows and arrows.   A Shah in the 1700s wanted to connect with the west and in doing so, brought a boot with a heel to the attention of aristocrats in Europe who took to them favourably. In fact it has been said that these heels gave men a ‘virile and masculine look’ and that ‘one of the best ways to convey status is through impracticality” see more of this in this BBC article “Why did Men StopWearing High Heels”. So you have it, men in high places wore heels and this continued for a while until they fell out of favour. This brown cuban heel boot has elastic sides which is indicative of the ‘chelsea’ part of the boot. Vulcanised rubber invented in the Victorian era gave rise to J Sparkes Hall producing a boot with elasticated sided which was revolutionary in terms of comfort and ease. Queen Victoris took to wearing them and made them favourable walking boots.  This style of boot got the name much later in the 1960s when socialist and artists hung round the Kings Road in Chelsea. It was there that the Beatles spotted the chelsea boot and commissioned London shoemakers Anello and Davide to make them but with the addition of a cuban heel. Voila. Now this mens dark brown cuban heel beatle boot is a must have addition if you want to create a rock and roll vibe or a modish one. Wear with jeans. Wear with a skinny suit. Wear with pride.