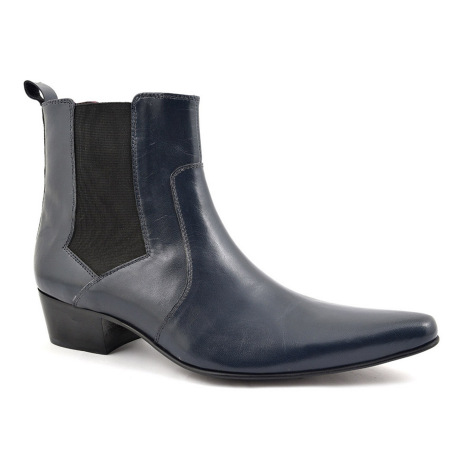 Lush cuban heel navy chelsea boot for a little height and lots of style. Simple lines on a pointed toe with a side gusset means this can look elegant or rock and roll depending on your outfit.  Interested in the history of these boots? Scroll down for a glimpse.

The Doors, The Kinks, Neil Tennant, Iggy Pop, The Kills, Russell Brand, Bob Dylan, The Rolling Stones, Andy Warhol, Alex Turner are a few names who favourite/d mens cuban heel beatle boots. Now you can join this rock and roll royalty by owning your own cuban heels. This navy number is a great colour choice to bring something different to your shoedrobe. Why not try these instead of the normal  black or brown with your denim? We can see them working with a sharp suit for a more modish look too. The heel is not a recent phenomenon in mens boots. In the 9th century, there was evidence of men wearing heels on horseback when going to fight. To have a heel wedged into the stirrup made for a steady stance when firing arrows. In fact, later in 1599, a Persian Shah forging links with Europe, took this style there and it became favoured footwear for royalty. Remember Louis XIV and his penchant for mens heels. In fact, the higher the heel, the higher your status around that time. It was considered a masculine look but over time this changed and women became the heel wearers.  The invention of chelsea boots are found in royalty too as Queen Victoria demanded easy to wear walking boots. Her bootmaker inserted elasticated sides instead of the usual buttons and laces which of course became prominent due to their easiness.  Along came the marvellous fifties and sixties when people were trying new fashion and shaking off the sombreness and rigidity of the forties.  Men began wearing chelsea boots again and The Beatles took this further by making this boot with a cuban heel. Favoured by Latino dancers, this addition took off and became known as the Bealte boot. The founder of Gucinari, Joe, took a liking to them and you can see an image of him here in a pair of beatle boots. These mens navy cuban heels have a pointed winkle picker like toe and a simple silhouette. The black side gusset is an interesting shape and all in all, these boots are a great pair of beatle/chelseas that will give you an edge when you wear them.