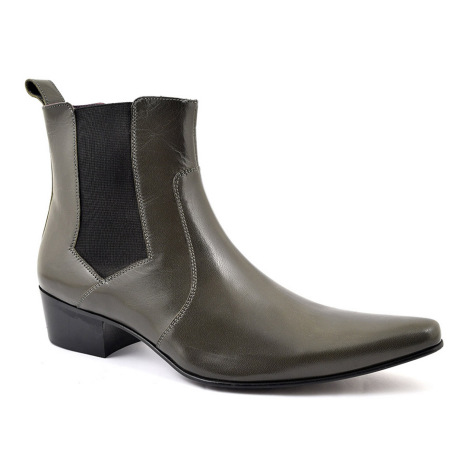 Lush cuban heel grey chelsea boot. Gorgeous leather, contrast stitch detail and elegant lines make this distinctive. Coupled with a 45 mm heel, it will give you all the stance and all the style. Remember, it was men who first wore heels! Scroll down for a snapshot of this.

Yes, it was men who began the fashion for high heels. Believe it or not, there was a practical point to it when warriors going into battle wore them to keep them solid in stirrups on their horses.  Elizabeth Semmelhack, Bata Shoe Museum Toronto writes how that helped them shoot their bow and arrow more effectively. Again, Persia was responsible for bringing them to the west around 1700 and as all things Persian were coveted at the time, high heels became desirable too. As they filtered down to the lower classes, the upper classes tried to differentiate themselves and the heels got even higher. Lets face it, the rich did not have to work in fields or walk on the cobbled streets of the time. Side gusseted boots came around the era of Queen Victoria and really this was the dawn of the chelsea boot as we know it. Cool and hip in the 60s, they were worn around the Kings Road and by pop stars of the day. The Fab Four delighted in them so decided to get some made but with a heel. And so we have the Beatle boot with the cuban heel, called this because of its connections with Latino dance. Mods also loved this style of boot and really taught us a thing or two about sharp tailoring whilst remaining ballsy and cool on a bike. This mens grey cuban heel boot is more edgy and would look rock and roll with some dark skinny jeans and a leather biker jacket. You could wear them in a slightly smarter way with simple slimline trousers too. We love the sleekness of these and the colour is a good substitute for the usual stuff we have in our wardrobes. We would recommend you invest in some shoe trees as this will keep the shape. As the toe is winkle picker pointed, it might be advisable to stuff with paper as this will aide the shape and deal with unwanted smells! As this is grey leather, it will be easy enough to maintain and we have a great guide here about how to give your boots a quick clean.