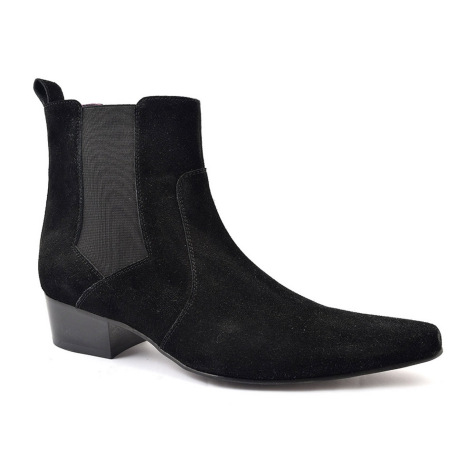 Black suede cuban heel chelsea boot with side gusset and pointed toe. Available in  many colours. Take your pick and check out a (very) brief history below when men wore heels to do battle!

As mens cuban heel boots go, this black suede chelsea has sleek simple lines to it. There is a touch of detail in that the side gusset has an angular shape and the toe is pointed. The fact it is in black suede is decadent and luxurious and it has the height associated with the cuban heel boot. Apparently, men in high boots can be traced back to Persia where a depiction on a 9th century bowl shows warrior men riding horses with the heels keeping their feet steadfast in the stirrups. Certain dandies like Louis XIV loved a heel but other like Napoleon certainly did not and could be blamed for the demise in men wearing them. Royal connections to this boot continue with the chelsea aspect being attributed to Queen Victoria who requested J Sparkes Hall to design easy footwear to slip on and off. The advent of vulcanised rubber meant that elastic could be used and was used to make the first such boots. As you will have guessed the name Chelsea derives from the west London Kings Road area where int eh 60s the cool kids would hang out in their chelsea boots. Many icons of the day wore them and The Beatles were one of them (well four of them). They loved them so much that they asked their shoemakers to make them but to have cuban  heels added….and so the beatle boot was born. Men in Latin dance wore high heel or cuban heel and so the trend began again. Cowboy boots are another form of mens footwear with heels. Modern day men can wear what they want. There are no norms that tie them. So grab a pair of these black suede cuban heel boots and rock up to the party in your skinny jeans and dance the night away to The Kinks, Iggy Pop or The Kills (all of whom love/loved wearing beatle boots). Age doesn’t matter either, what matters is confidence in your style and more importantly, in yourself. There are a lot of mens cuban heels to choose from,  click here to get to more.