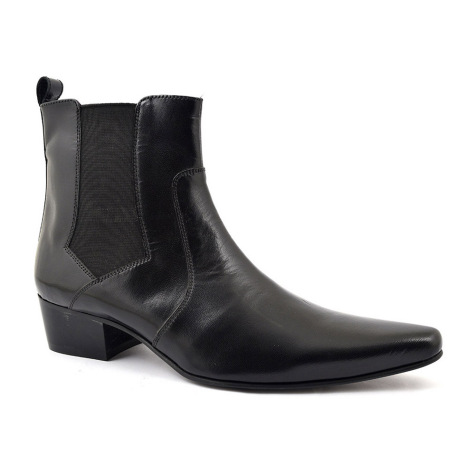 Classic black cuban heel boot with a 45mm heel. It has a side gusset and would look great with skinny jeans. Walk tall in these gorgeous boots.

Guitar toting, hip swaying rock legends have been seen time and time again wearing mens black cuban heel chelsea boots. Sword wielding arrow shooting warriors were also seen in them but far from it being an expression of style, it was a practical necessity for keeping they boots firmly in the stirrups when on horses and commencing battle. Already, you can see what iconic company you are in if you  buy a pair of these black cuban heels. Men continued their love affair with heels when they became  a status symbol and actually had a masculine edge to them. In aristocratic society in the 1700s, the higher the heel, the more social status was accredited. You did not see workers in the fields wearing them thats for sure. Dandies and flamboyant dressers like Louis XIV loved them.  As they became more effeminate, they began to wain in popularity with men…until the 60s that is. This era of swinging and twisting brought back the chelsea boot which had been created for the Queen Victoria as a comfortable boot to walk in. Young cool original men and women swayed around Chelsea breaking away from the sombre dressing of men in the decades before. So cool were they that the Beatles asked for chelsea boots to be made but with a cuban heel. We might add that the founder of this company was a huge fan of the Beatles and was known as Ringo himself in those years as evidenced here! Now this black cuban heel has the side gusset of the chelsea and a pull tab to the back. The toe is like a winkle picker and to keep the shape of this, you could stuff with paper. This is a good way of keeping up the shape, keeping odour at bay and, this is genius, a good way to deal with them if they get really wet. The looks of this cuban heel can change whether you wear it with a mod like suit and dandy things up a bit or grungey if worn with skinny jeans. What we would say is, whatever you wear them with: be yourself and wear them with pride.