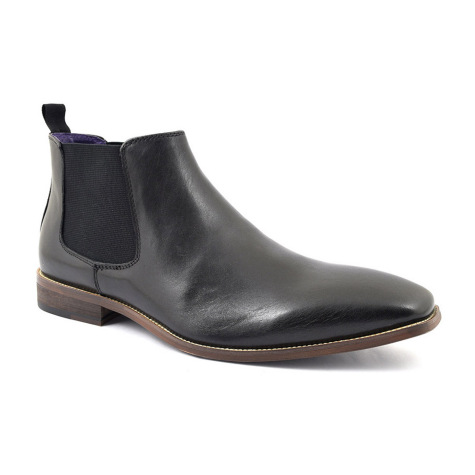 A sophisticated black chelsea boot crafted in fine leather. It has a simple design with stitching to the outer sole for a handmade touch. Wear with causal attire or even with a suit for a less formal look.

We have here a contemporary black chelsea boot for men who want something versatile and stylish. The sumptuous black  leather on the upper contrasts really beautifully with the thin light heel. Both tie together seamlessly with the black stack detail to the heel. This mens boot has a modern feel to it but the chelsea actually dates as far back as Victorian times.  Elastic came about around then and the Queen Vics bookmaker decided to use it in making footwear which she loved to wear. J Sparkes Hall (the said bootmaker) patented it as his own in 1851 citing “She [Queen Victoria] walks in them daily and thus gives the strongest proof of the value she attaches to the invention”.  The chelsea boot is a close fitting ankle boot and its most notable feature is the elasticated side panels and tab of fabric on the back to slip it on and off easily. The chelsea boot is similar to the Jodhpur and was popular attire for men and  women. It was used as a riding as well as walking boot.  Then, the rock and roll 50s and swinging 60s brought them back into vogue. The Kings Road set of the 60s is believed to explain how Chelsea became the name attached to the boot. Many stars such as the Rolling Stones and Jean Shrimpton wore the boots. So, now it is your turn: so many outfits will work with this mens chelsea boot. You can be sure a suit will look rakish with them, in turn, rock a casual look in them. For mens boots with a designer touch you cannot get better than these mens black chelsea boots.